when i think of the manga adaption of 'nhk ni youkoso', the two words that come to my mind are "raw" and "vomit". neither of these are insults. it's a truly disgusting, disjointed mess which falls apart in the second half, but at the same time it feels genuinely real and visceral in a way few manga manage. its characters are wretched people, but i feel like i know them-- they could be me beneath all of the truly awful theatrics and gags. the trope of a cute girl saving an outcast man is intensely overplayed, and misaki and sato's relationship is one of the few intelligent takes on this idea. as a side note, i can't stand how many people bash the manga for its portrayal of misaki-- her repulsive manipulativeness makes her more than another one-dimensional fantasy.

'parasite in love' is the manga adaption of miaki sugaru's novel of the same name. it wouldn't be worth a mention without yuki hotate's truly gorgeous illustrations. the level of detail in each panel astounds. the story is another take on the "mentally ill man becomes involved with a mysterious cute schoolgirl who (almost) saves him" trope set against the backdrop of a medical mystery involving parasites. the parasite is physical, but the story invites a wealth of allegorical readings. overall, while the manga is certainly competent, for me it didn't do enough to break free from the trope of its premise.

i read 'yofukashi no uta' by kotoyama... er, well, as i write this in july now i'm already rereading it, after first reading it in may. yikes. i struggle to explain why i like this series as much as i do, but simply put, it's fun. it's fast-paced, schlocky, and fun. no doubt the premise of the series-- a budding relationship between a 14 year old boy and a ??? year old vampire-- has drawn a lot of ire, and if you're grossed out by that, there's nothing i want to say to convince you to give it a try. once the shock of the first few chapters has passed, 'yofukashi no uta' transforms into a kind portrayal of the awkwardness of adolescence, though it struggles with its own identity crisis (noir detective story? battle shounen? school slice-of-life?). 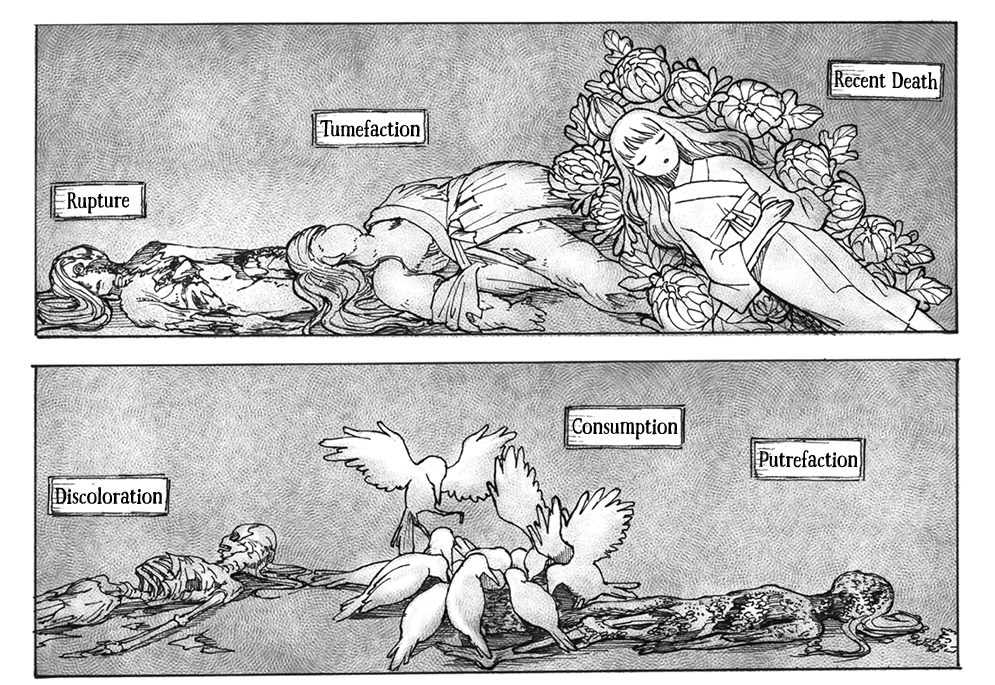 i read every translated short story i could find by fuyumushi kaiko, most of which are collected in 'kimi no kureru mazui ame'. kaiko's art is sublimely charming, and the premise of each story is promising. nonetheless, one gets the feeling that the author isn't completely confident with the medium, and as a result no story sticks the landing as well as it could. i think their work oozes with promise, though, and i'll be reading their longer manga if/when they get translated!

'takopi no genzai' enjoyed enormous popularity in japan this spring, and it's easy to see why. the art is cute (and not just generic moe), and the story is soul-crushingly depressing in a way which makes people want to say 'i bet you can't survive reading this!'. the story's short length and tentative optimism stop it from feeling like another sadistic slideshow of children suferring. though, i do think that it would've benefited from being three volumes rather than two-- the conclusion is satisfying and logical, but the path there is a little too rushed. 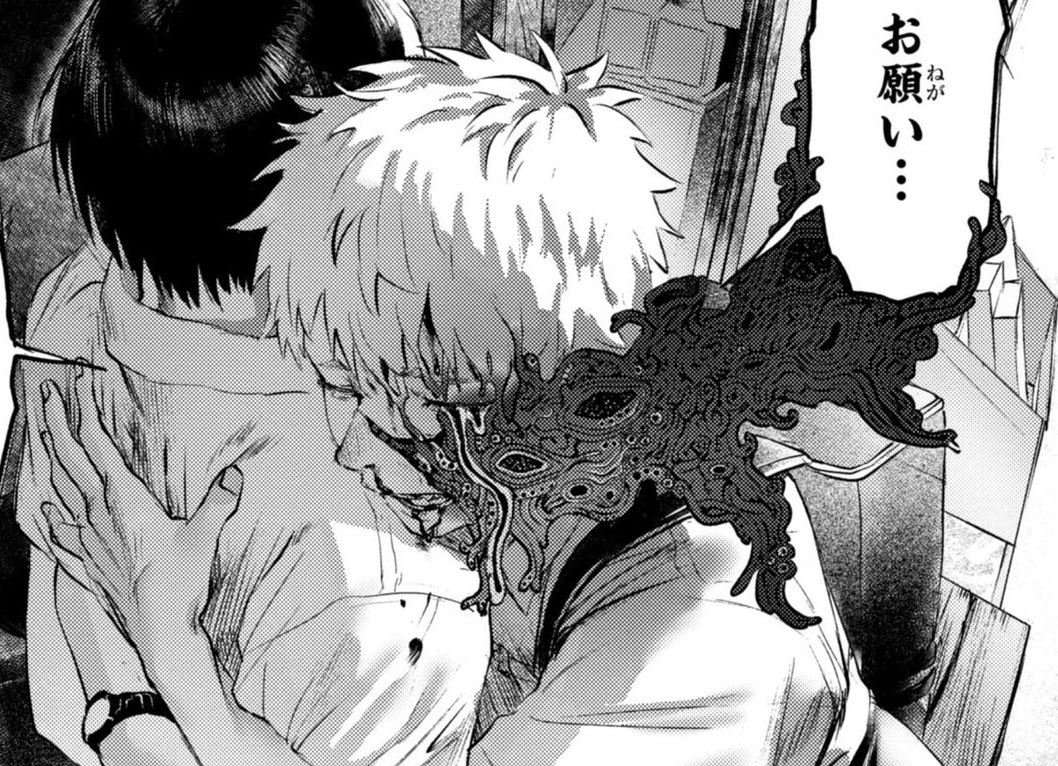 i read 'hikaru ga shinda natsu' despite my apathy for BL (no moral superiority, it's simply that i'm a lesbian). the art is truly gorgeous, and the body horror is so lovingly rendered. i think the story is promising, too. with only six chapters out, it's hard for me to say anything definitively; it still needs time to develop, and hopefully it'll take its time and let us wander in the forest some more. 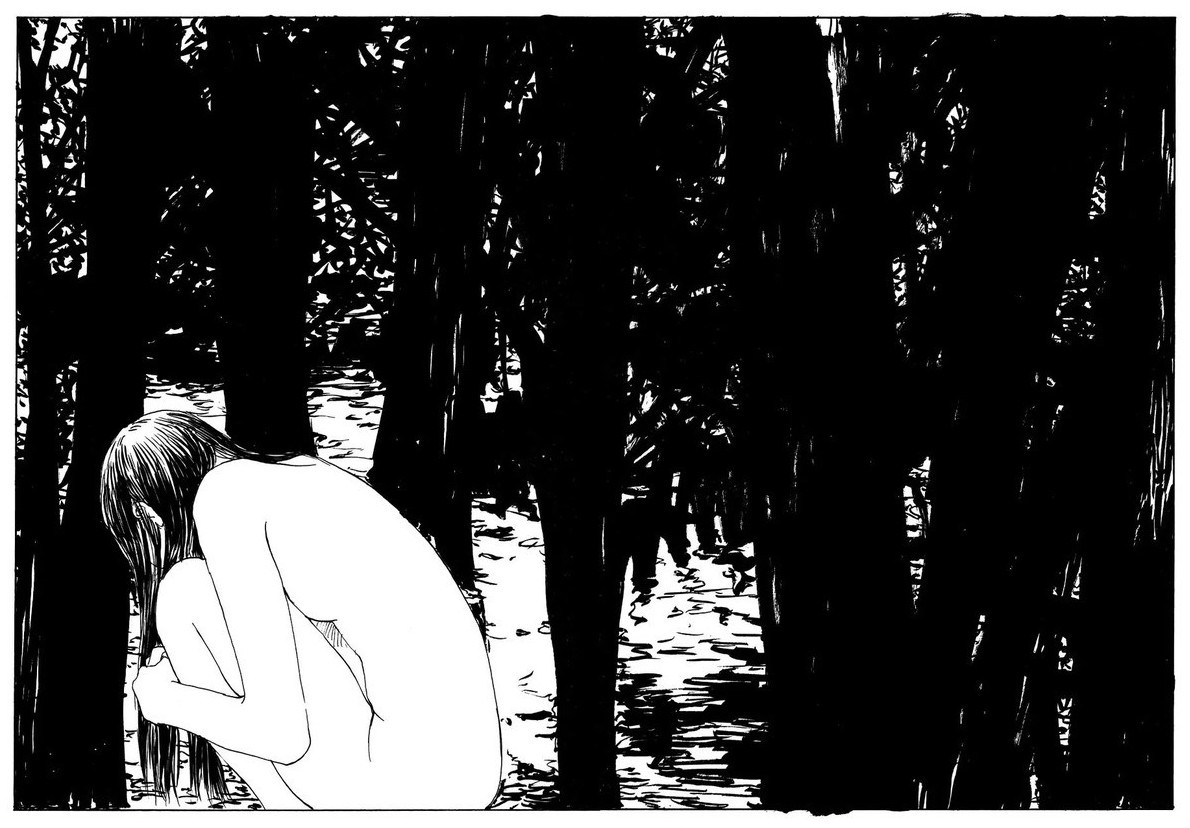 i reread 'sasurai emanon'. it was difficult to choose my favorite panel among all of the intricate renderings of emanon naked and/or smoking in various vistas. i loved it more than i did before, surely not only because of an increased appreciation for boobs (lol), but because i appreciate how confident it is in its silence. wandering emanon understands that you don't need a text bubble on every page-- simply let the environments speak for themselves! they convey as much dread/loneliness/warmth as any hackneyed dialogue. i love you, emanon. 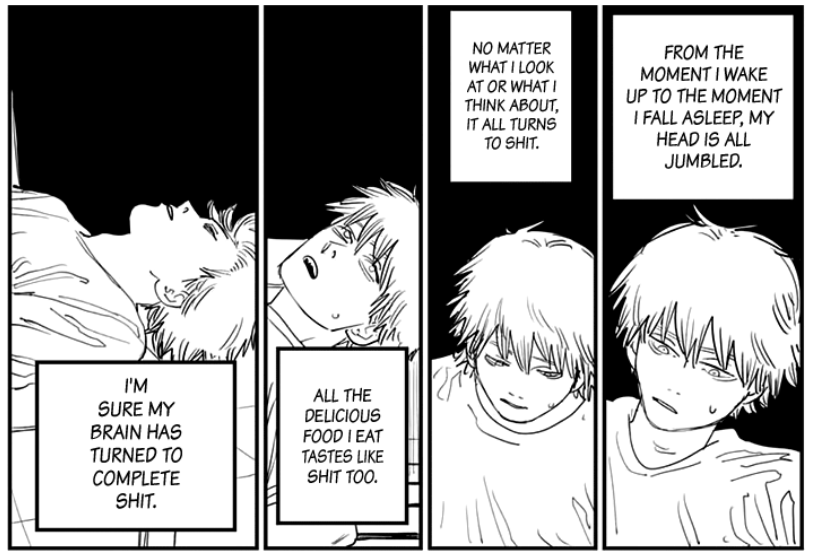 i reread chainsaw man, having first read it six months ago. again, i felt that beneath all of the schlocky hyper-violence there's a cogent emotional throughline. regardless, if it was only the gutspilling and bloodbaths, i would find it just as fun, but it's the heart which makes it so memorable. the ninety-seven chapters pass very quickly, and i'm quite excited for its continuation, not to mention the anime... i hope it's good... 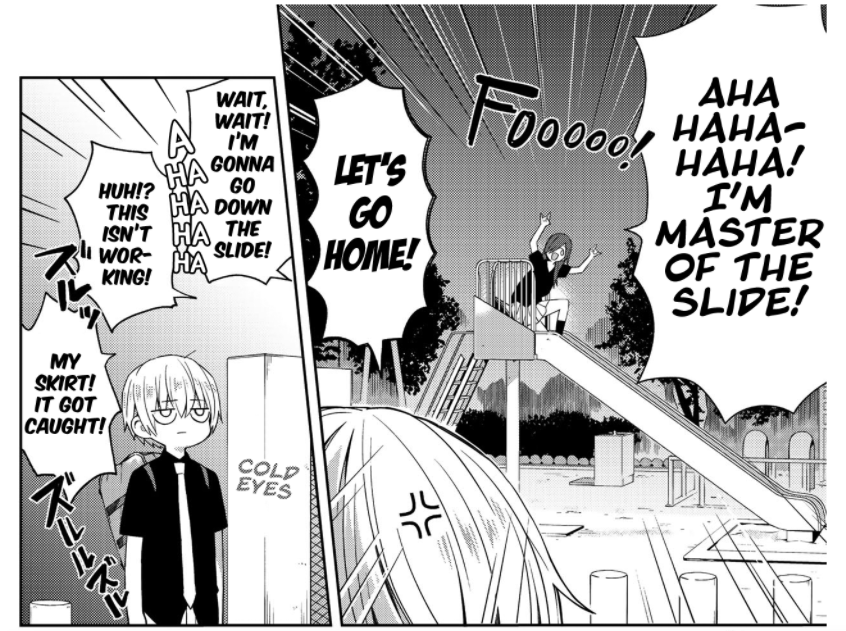 i've been reading ningiyau's 'school zone' over the past week or so. it's hard to sell me on a school comedy manga, but the perfectly relatable patheticness of its characters are charming enough to make it an enjoyable read. the gags are good, the characters feel real, and the emotional throughlines are genuine. the art is consistently high-quality, and of course, it's yuri. i don't like yuri unless its characters are pathetic enough to resonate with me, and school zone definitely works in that regard. 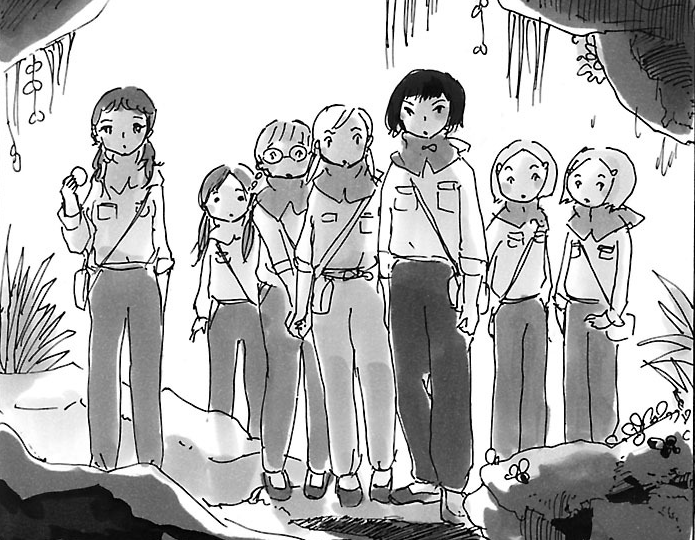 today, i read 'cocoon' by machiko kyou. it's a tale about wartime okinawa and a girls' nursing unit. the whimsical lightness of kyou's art is strikingly juxtaposed against the story's brutality. unfortunately, its minimalism also lends panels an unfinished quality. it's a memorable story for its style and subject matter, but i don't think i'll reread it anytime soon. 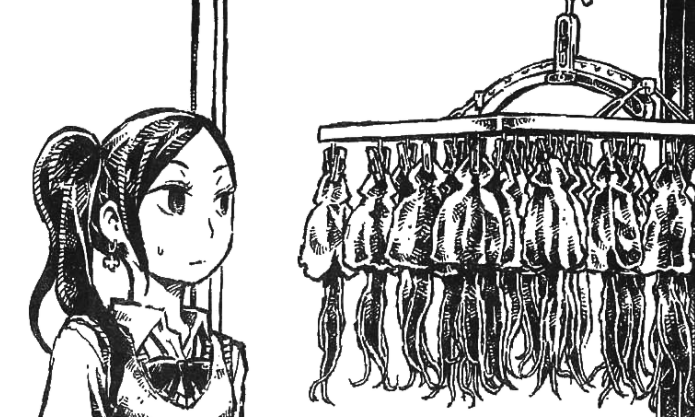 what does 'daidai wa, hantoumei ni nidone suru' mean? MAL translates it as 'the bitter orange, translucent it goes back to sleep'. it doesn't make any more sense after reading the two-volume manga, which is an eccentric collection of short stories taking place in a small port town. to be honest, i wanted to like it more than i did. the art is breathtaking, with each panel defined by heavy hatching and bold lines. the synopsis is fantastic, and there are a handful of stories that are memorable (like 'sitting mermaid', chapter 9) but besides that... 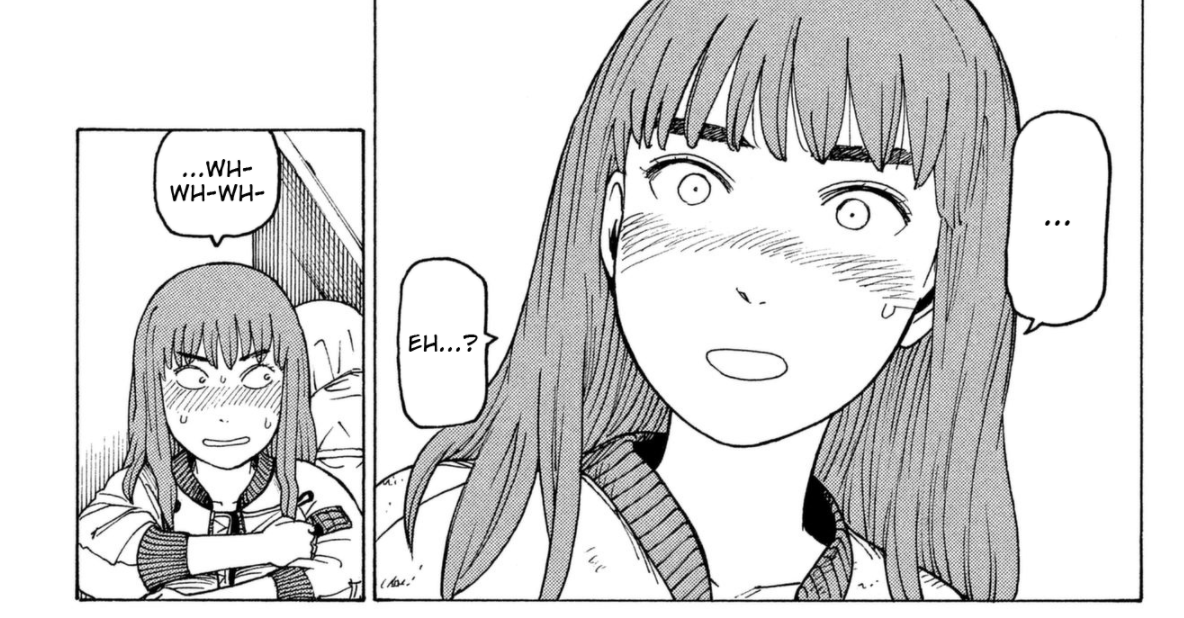 someone needs to keep masakazu ishiguro in check. his art has only gotten better since soremachi, and the synopsis of tengoku daimakyou is promising, but the level of self-indulgence in his writing is simply too much for me. i think my breaking point was when one of the main characters was revealed to be a boy transplated into the body of his dead sister, which he is aroused by. ugh! it's a shame. i'll go reread soremachi.