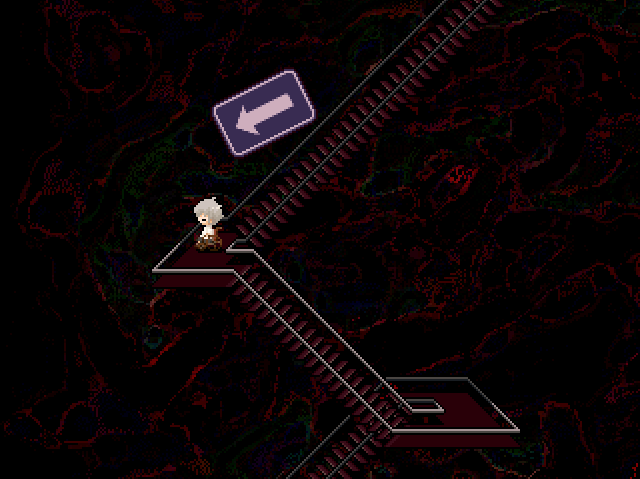 Withers is an in-development Yume Nikki fangame by Garakuta. It provides lovingly rendered surreal vistas without blindly regurgitating the same motifs as other fangames. I've found myself coming back to it again and again, marveling at every corner crammed with detail. It's not devoid of horror, but it's not oppressive either-- it's safe to wander here. It feels particularly kindhearted (find the night camp event and you'll see what I mean). Its small size makes it more player-friendly than a monstrosity like Yume 2kki, though it falls into the same traps as its inspirations-- there are several sprawling empty worlds and plenty of frustrating mazes. 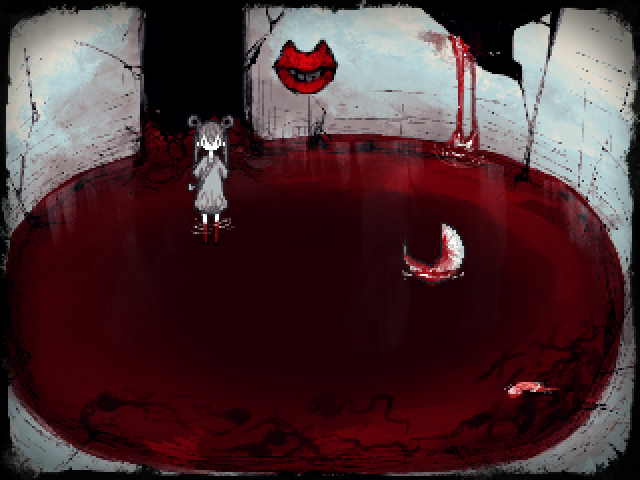 Mama ni Aitai is a 2018 horror game by Nonoyuki. When I first saw screenshots, I was surprised it hadn't been translated into English yet. After playing it, I pray that it'll never be translated into English. It's difficult to explain what I mean without spoilers, but it concerns itself with an intensely sensitive issue with a complete lack of nuance, though it comes off less as a political screed and more of an attempt to satisfy the author's fetish. The graphics are lovely, but the gameplay is utterly unremarkable. 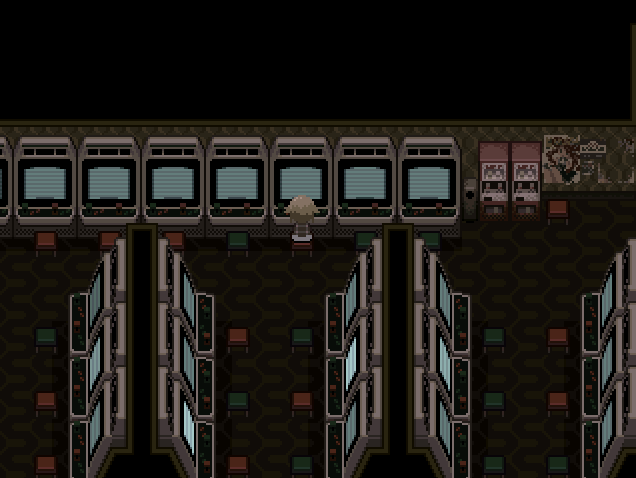 Yume 2kki is an in-development collaborative Yume Nikki fangame. Painting Yume 2kki with one brush is impossible given how much varation each developer brings to the game. The massive number of maps means that there's always somewhere else left to explore, but it makes getting to any specific location a hassle, and for every jaw-droppingly detailed Travel Hotel there's an Omurice Labyrinth or Erythrocyte Maze which makes you want to bash your skull into the wall. I'm left repeating the same thing I've said for every other YN fangame: if you don't mind actively hostile design, then it's a fantastic game. 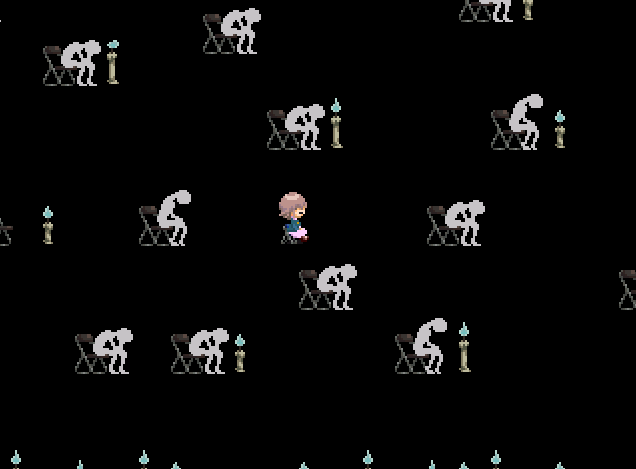 Yuque is an in-development Yume Nikki fangame by 794810. Yuque suceeds at being a worthy successor to Yume Nikki rather than another copy. It paints its world in an inexplicable palette, eschewing gore in favor of building a sense of alienation created by the subtle wrongness of the world. The journey to the Ash Effect is particularly beautiful and has solidified the game as one of my favorites-- the temple where the Folding Chair effect is found made a lasting impression as well. 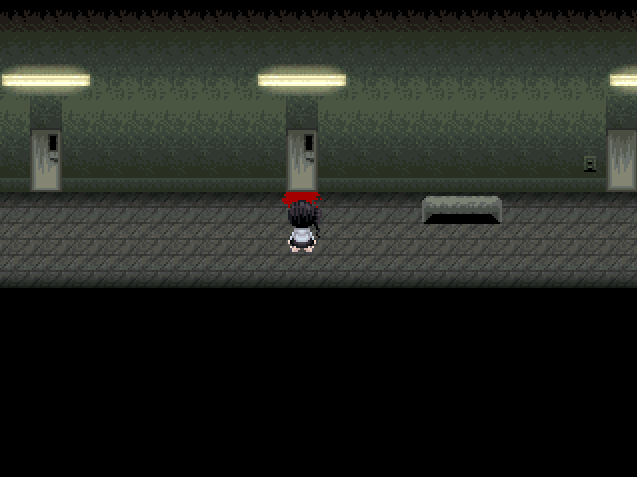 Deep Dreams is a 2021 Yume Nikki fangame by Noildoof. It's richly detailed and made with palpable love, with a mood that's consistently somber but rarely horrific. It borrows plenty of location archetypes from YN but imbues each with its own vision. (At this point, I wonder if there's a fangame without a Wilderness.) The sprawling maps filled with teleports remind me of Wataru's maps in 2kki for better and for worse-- every single location becomes a maze, though my preference for smaller words is nothing more than a preference and certainly not any concrete criticism. 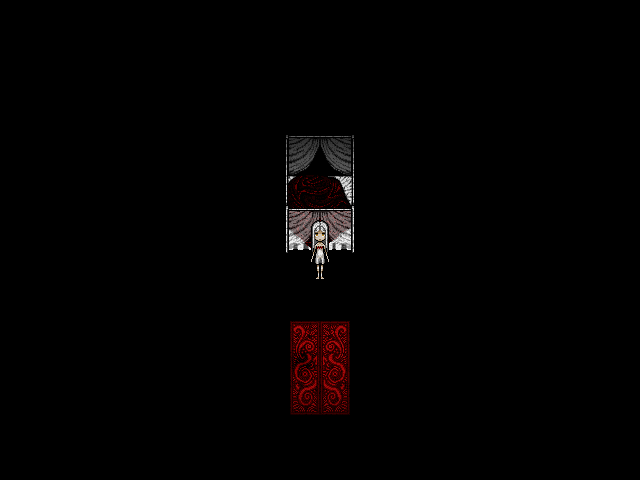 Divinity Fatum is an uncompleted horror game by GreyInvidia. None of the developer's social media accounts have been updated since 2016, so I sincerely hope he doesn't read this. Divinity Fatum consists of one massive empty world made of a sparse handful of tiles where the gameplay consists of shuffling from one side of the world to another to pick up a piece of paper that says something like 'GOD IS DEAD'. I can understand why the developer says that you need to be patient to play it, and I'm not patient enough. Maybe I missed a fantastic story, but I can't tolerate playing any further. 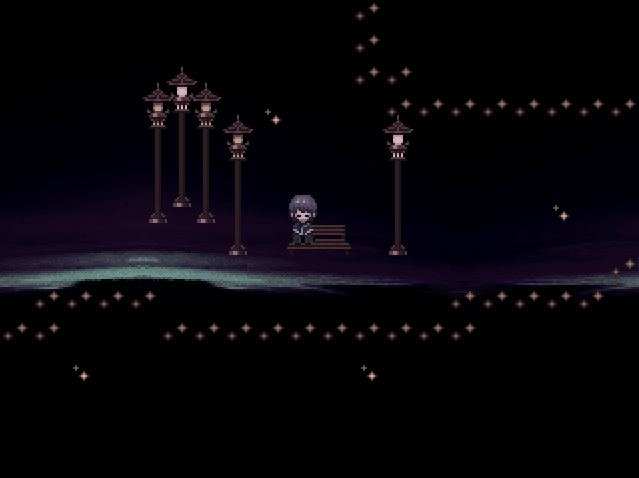 Ephemreal is an in-development Yume Nikki fangame by -Drifter. Ephemreal is bite-sized, with only four worlds accessible from the Nexus. That's undoubtedly a good thing, because every location that does exist is wonderfully, creatively rendered. It's a game with an affinity for steel blues and hidden tranquil nooks (like an underground lake surrounded by glowing mushrooms).